When you absolutely have to have something sweet and delicious, what you really need is Treatsies.
TO MAKE AN ORDER...simply email us at treatsiesbakery@gmail.com with your request and we'll get back to you within 24 hours to arrange free delivery to your home or hotel!

We are pleased to announce the launch of our new website! Please visit us at www.treatsiesbakery.com to see our delicious treats. The site will be updated regularly, so visit us often to see what's cooking.
Posted by Renee at 8:12 AM 0 comments

Normally, I'm not a big fan of secrets. Generally, I think honesty is always the best policy, as they say. But for every rule there is an exception. For example, presents and surprise parties are always worth shutting your trap for. My husband did an excellent job of keeping his proposal a secret. I had no idea he was even thinking about it. Sometimes secrets can be wonderful. 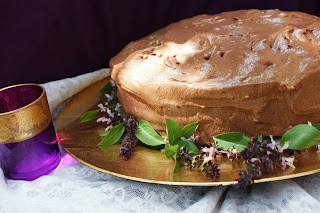 So, what about secret ingredients? Love 'em! I like it when cooks have a trick up their sleeve. I love the sly smile a grandmother gets when you ask her what's in her dish that makes it so extra special. It just makes cooking and eating that much more fun. So I made a cake with a secret, and I'm not telling. It's nothing weird or gross, I promise. It's all deliciousness. 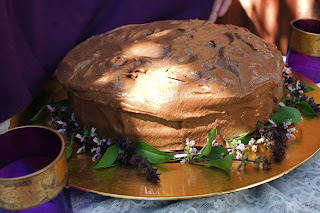 This cake is ridiculously light and moist. It's so delicate you could eat it with a spoon. Or you may want to opt for a shovel. The frosting is sweet, but not intensely chocolaty. It tastes just like what my dad used to make, even though I have a suspicion he might have put Nestle's Quik in his chocolate frosting. I'll let that be his secret. You won't be able to spot the secret ingredient, you'll just be able to sense something a little extra. Keep eating to keep guessing. 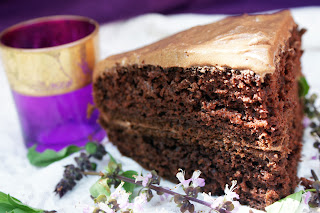 In addition to chocolate cake, we also have a new logo designed by the incomparable Geoff Griggs, who is Treatsies' IT guy, web designer, chief taste-tester, number one hand-holder, and one of my all time favorite humans. He's been working hard on the new website, which should be ready to launch shortly. We hope you like it.

Until then, let us make you a chocolate cake with a secret ingredient. And don't forget the milk.

Photos by Monica Szczupider
Posted by Renee at 8:18 PM 0 comments

I am a huge advocate of acting like a kid. I can't go near a swing without taking my turn, and I am notorious for laughing too loudly. And naturally, I'm a big fan of never skipping dessert, even if you don't eat your peas. Occasionally though, I do enjoy pretending to be an adult. 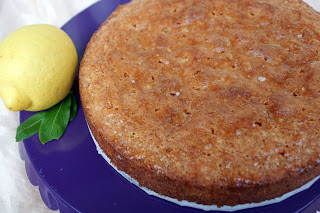 This cake is thoroughly sophisticated in its simplicity. In place of flour, it has corn meal and ground almonds to give it a unique texture. In addition to the lemon zest in the cake itself, it's also soaked in lemon syrup. It's sweet and tangy and rich and delicious. 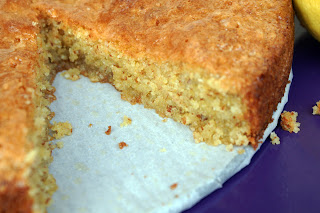 And did I mention this cake just happens to be gluten-free? Making delicious desserts is our number one priority. I love it when we find something that can fit into a gluten-free diet without sacrificing anything in the way of flavor. This is the perfect dessert for a sophisticated dinner party, you know, when you're pretending to be all grown up. It's fresh summery flavors and Italian inspiration make it perfect for pretending you're on a terrace in Tuscany. 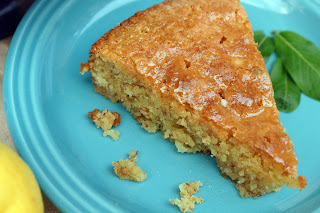 Variety is the spice of life. Cakes dripping with frosting are divine, but there's something about the simple elegance of a flavorful naked cake. I'm up for nearly anything, provided it makes my mouth water. Lemon polenta cake? Why, thank you. I don't mind if I do.
Posted by Renee at 6:36 PM 0 comments

Let's talk about chocolate cupcakes. Specifically the light and fluffy kind with thick fudgy icing. Not the billowing cloud of butter cream, but the kind you can feel your teeth sliding into. The kind that melts in your mouth like a chocolaty dream. 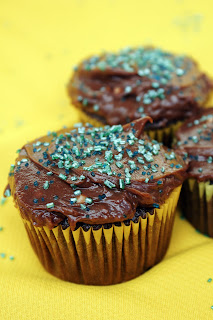 There's really not a chocolate cupcake I'd ever say no to, unless it's concealing something healthy, like fruits or vegetables. I love giant mounds of buttercream, but this fudge icing is like a Hostess cupcake gone mad. I absolutely adore it. And the cupcake itself is like a pillow. Though I suppose one wouldn't get much sleeping done with that sort of temptation under their heads. Silliness aside, this cupcake is heaven. 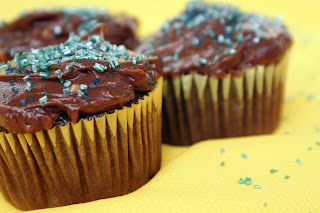 These were made for a going away party for someone headed off to Brazil, so I chose yellow papers and blue and green sprinkles. But one of the greatest things about cupcakes is how they can be personalized for almost any occasion. Endless possibilities. Just the way it should be. 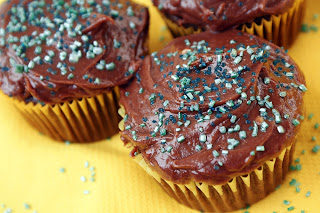 So yeah, chocolate cupcakes. Aren't you glad we had this little chat? Get ya some!

Photos by Monica Szczupider
Posted by Renee at 9:15 PM 0 comments

I've got another savory treat for you today. It makes my mouth water remembering it. And it involves my second favorite food group, cheese! And lots of it. 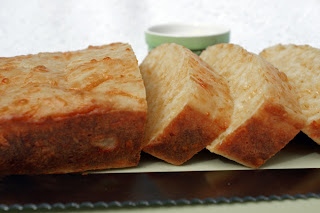 This loaf is dense and simply packed with cheddar cheese. I prefer it warm out of the oven, but it's pretty delicious at room temperature, too. While I am a bit impatient and simply stuffed my face with a plain slice of bread, I bet this would also make a pretty ridiculous grilled sandwich. I mean, grilled ham and cheese with cheese bread? How crazy is that? 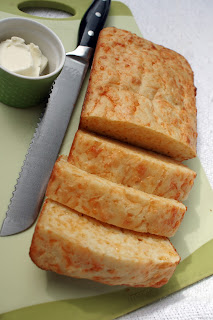 It's hard to keep track of the time out here in the middle of the ocean, what with it still being in the mid-80's everyday. I can't believe it's November already. Don't forget to give us a call or drop us an email if you would like to order a Thanksgiving dessert or side dish. Thanksgiving is my favorite holiday, but I know how stressful it can be. There's no shame in getting a little help. That's where Treatsies comes in. 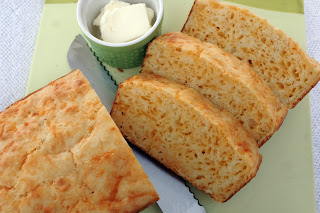 And in the meantime, make sure you get your cheese fix anyway you can. May I suggest getting it in bread form? It's portable. Nothing like a cheesy treat you can throw in your purse. Get ya some.

If you've ever met me, you know that I'm a bit of an anglophile. So much so that I even married a most charming Englishman.  How can you read your way through their rich literary history and not fall in love with that beautiful, rainy, green countryside or the bustling streets of London? Don't even get me started on Hogwarts. 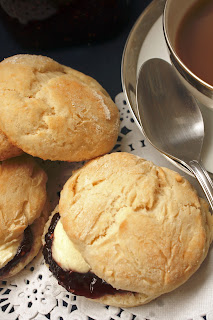 For my husband's birthday, someone gave him a jar of clotted cream. This was something I'd only ever read about in books, so I was excited to be able to give it a try. And on what does one put clotted cream? Why, scones, of course. 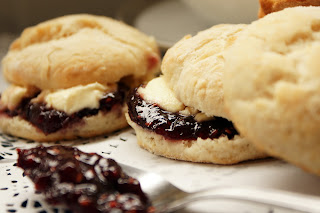 Traditional English scones are a bit different from what we're used to seeing in our American coffee shop pastry cases. They're not triangular, but round, and actually look a lot like biscuits. Scones are a bit heavier, however. They're still buttery, but they definitely benefit from a lovely cup of tea and a big dollop of Hobbitesque jam. Preferably made from gorgeous fat berries picked from your own idyllic English garden. 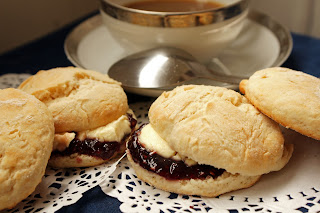 Now, clotted cream was a bit of a surprise. The name makes it seem like it might be similar to cottage cheese, but it's actually completely smooth and extremely thick. It can't be drizzled or even dolloped. It's almost as thick as cream cheese and basically tastes like plain heavy cream. I wouldn't eat it by itself, but paired with the raspberry jam, it gave a wonderful creamy quality to the whole experience that was simply delightful. 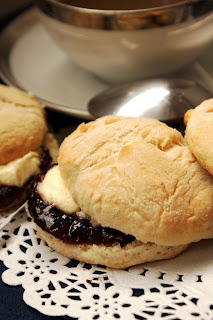 By the way, don't ever ask a British person if they want biscuits and gravy for breakfast without properly interpreting. They will give you a look of horror and think you're about to feed them cookies with brown beef gravy, which I have no doubt would be ever bit as disgusting as it sounds. Just stick with the fresh baked scones with jam and clotted cream, or cream cheese if you can't get the import. Get yourself a cup of tea, turn on Downton Abbey, and you're golden. English treatsies like no other.

*Photos by Monica Szczupider
Posted by Renee at 1:43 PM 0 comments